Race and the Criminal Justice System

After the Civil War Southern states embraced criminal justice as a means to reimpose racial control over African Americans. This included the passing of “Black Codes” and later Jim Crow laws. The 13th Amendment to the Constitution abolished slavery and involuntary servitude, except as punishment for a crime. It is this loophole in the 13th Amendment that Southern states exploited in passing “Black Codes” and in setting up new economic and labor systems that relied on the arrest and imprisonment of African Americans. For example, these codes implemented vagrancy laws that criminalized unemployment, resulting in African Americans returning to slave-like environments through forced labor and convict leasing. Violation of the black codes also resulted in offenders having to pay fines; those who were unable to were forced by the state into labor until they worked off their balances.

Why is this important? Because the same criminal justice system that was developed after the Civil War to reimpose control over African Americans exists today. Imprisonment has been and continues to be used as a weapon to control communities of color in ways that aren’t used in other communities. We see this in the crack-cocaine sentencing disparity, the over policing of black communities, the excessive criminal fines and fees imposed on defendants, and a bail system that relies on payment to secure one’s freedom.

As stated in the Vera Institute’s 2018 report, An Unjust Burden: The Disparate Treatment of Black Americans in the Criminal Justice System:

“racial disparities in the criminal justice system are no accident, but rather are rooted in a history of oppression and discriminatory decision making that have deliberately targeted black people and helped create an inaccurate picture of crime that deceptively links them with criminality.”

Browse each section below to learn how racial disparities impact every aspect of our criminal justice system:

Additional Resources on Race and the Criminal Justice System

"Racism is so universal in this country, so widespread, and deep-seated, that it is invisible because it is so normal."

According to the Kirwan Institute for the Study of Race and Ethnicity, implicit bias "refers to the attitutes or stereotypes that affect our understanding, actions, and decisions in an unconscious manner. These biases, which encompass both favorable and unfavorable assessments, are activated involunarily and without an individual's awareness or intentional control. Residing deep in the subconscious, these biases are different from known biases that individuals may choose to conceal for the purposes of social and/or political correctness. Rather, implicit biases are not accessible through introspection. The implicit associations we harbor in our subconscious cause us to have feelings and attitues about other people based on characteristics such as race, ethnicity, age, and appearance. These associations develop over the course of a lifetime beginning at a very early age through exposure to direct and indirect messages, in addition to early life experiences, the media and news programming." Everyone possess implicit biases. Why is this important? If everyone possess implicit biases, then these biases exist within police, prosecutors, defense attorneys, judges, correction officers, probation officers, etc.

What Are Your Biases? - Take the Test

Another way that legislatures have worked to address racial disparities is by passing legislation to require various actors in the criminal legal system to collect and report demographic data, including data on race and ethnicity, in conjunction with data related to arrests, plea negotiations, dispositions, restitution ordered, and other aspects of the criminal legal system. Some recently passed provisions, such as Colorado’s SB 217 and New York’s A 10609, focus on data related to law enforcement and police contacts, such as use of force, arrest-related injury and death, and unannounced entry into a residence. Vermont passed S 219 this year, requiring that the Secretary of Administration only approve grants from law enforcement agencies that have complied with race data reporting requirements. Connecticut SB 880 and Utah HB 288 mandate demographic data collection and reporting from prosecutorial agencies, courts, and corrections. Colorado HB 1297 requires all jails to report quarterly data on their population, including their pretrial population, with a focus on collecting data on race, ethnicity, and homelessness.

In July 2019, Rep. Jerrold Nadler (D-NY) and Sen. Kamala Harris (D-CA) introduced the Marijuana Opportunity Reinvestment and Expungement (MORE) Act (H.R. 3884/S. 2227). In addition to removing cannabis from the Controlled Substance Act and creating a process for expungement and resentencing of prior convictions, it seeks to address the harm caused by the War on Drugs on communities of color. The legislation prohibits immigration penalties based on marijuana. It would also create a Cannabis  Opportunity Trust Fund that will establish (1) the Community Reinvestment Grant Program to fund community organizations providing services in communities most harmed by the War on Drugs; (2) the Cannabis Opportunity Program to fund Small Business Administration loans to support socially and economically disadvantaged individuals who own marijuana businesses; and (3) the Equitable Licensing Grant Program to provide jurisdictions with funds to develop and implement equitable marijuana licensing programs targeting individuals most adversely impacted by war on drugs.

There’s also a host of federal legislation pending that would address the collateral consequences of a conviction, which would aid in addressing the harm caused by the disproportionate impact of mass incarceration on communities of color.

Visit NACDL’s Legislative Action Center for more information on how you can engage your elected officials and to stay abreast on federal legislation addressing racial disparities in the criminal justice system.

NACDL has been and remains committed to examining race as an issue within the criminal justice system, convening projects and the Race Matters I and II conferences in 2017 and 2019, to address tackling the issue of racial bias in the court system.

We continued these efforts August 23-25, 2018 at the Presidential Summit concurrent with our 17th Annual State Criminal Justice Network Conference. The event, entitled Shattering the Shackles of Collateral Consequences: Exploring Moral Principles and Economic Innovations to Restore Rights and Opportunity, was our opportunity to shed light on how the pervasive collateral consequences and legal barriers that arise from contact with the criminal justice system, in particular as they relate to race.

This discussion series seeks to highlight how race intersects with various issues in the criminal legal system, navigating these racial disparities, and ways to advocate for change. Previous events have focused on issues around policing, pretrial practices, public defense and collateral consequences. Please check the webinar resources page for updates regarding additional events.

Race Matters Summit: The Impact of Race on Criminal Justice

Race Matters in our criminal justice system. It affects what happens from initial contact with police on the street, to the end of the case and everything in between. As part of being effective advocates for our clients, criminal defense lawyers face the challenge of confronting the difficult issues presented by race in America. The Race Matters program is designed to help practitioners identify and confront issues of racial bias in our courts, the law enforcement community, by prosecutors, and yes, even the defense team. Check out videos of each presentation from our past two programs, as well as related written materials.

On Thursday, October 16, 2014, NACDL hosted a webinar entitled Under Siege: The Defense Bar Examines Police Militarization, Ethnic & Racial Dynamics of Sentencing, and Their Impact on Criminal Justice Outcomes. The webinar was in response to the uprisings in Ferguson, Missouri subsequent to the police killing of an unarmed black teenager; and the ensuing swift and extreme police response.

The webinar also explored the plethora of polarizing issues including racism, implicit bias, disparate sentencing policies, as well as, the over-policing of minority and poor communities.

Panel I-The Issues, addressed militarization, ethnic & racial dynamics of sentencing and their impact on criminal justice outcomes. Panel II-Community Perspective and Solutions examined the historical and systemic issues associated with crime and the response of police to those communities most affected by crime. The panel also addressed solutions policy makers and communities can make to solve these issues on the local, state and federal level.

Panel I - The Issues   Panel II - Community Perspective and Solutions 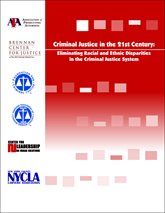 Since 2012, NACDL has embarked upon an important and timely project addressing racial and ethnic disparities within the criminal justice system. NACDL, along with the Brennan Center for Justice, the New York County Lawyers' Association, the Center for NuLeadership on Urban Solutions and the Association of Prosecuting Attorneys, initiated the project with a two and a half day convening entitled Criminal Justice in the 21st Century: Eliminating Racial and Ethnic Disparity in the Criminal Justice System, culminating with the release of academic articles recently published in the New York University Journal of Legislation and Public Policy.

Elements of the project have included the October 2012 convening; a report detailing recommendations generated from the convening; a series of articles on race published in The Champion magazine; a three-part podcast featuring organizers of the conference discussing the goals and objectives of the convening and subsequent report; the second convening entitled Criminal Justice in the 21st Century: Eliminating Racial and Ethnic Disparity in the Criminal Justice System: Advancing the Reform Dialogue Through Action with links to the webcast; and the New York Journal of Legislation and Public Policy academic articles are the final elements of this major undertaking. The Journal series features articles from leading academics on the issue of race and ethnic disparity in the criminal justice system. In addition many of the academics participated on panels related to their articles.