NACDL is actively working on reform in the area of conspiracy law. Currently, the federal criminal code has a number of conspiracy provisions, but the provision to defraud the United States, 18 U.S.C. § 371, is especially worrisome. It has been interpreted to include almost any effort to interfere with a function of the federal government through deceit. NACDL is working to reform this vague provision, and other aspects of criminal conspiracy law, to ensure only those truly deserving of punishment are swept up in its net.

Adding to the concerns raised by the amorphous federal criminal conspiracy statute, the U.S. Supreme Court held in Pinkerton v. United States that a conspirator is criminally liable for the foreseeable substantive crimes of his co-conspirators in furtherance of the conspiracy, even if the conspirator himself played no part in the substantive offense and did not intend that it occur. This is the only case in the federal system that creates a common-law, judge-made theory of criminal liability. NACDL advocates that the basis for a criminal conviction should not be based on the sole decree of federal judges, but on careful legislative judgement. Read the full Pinkerton decision.

§ 371. Conspiracy to commit offense or to defraud United States

If two or more persons conspire either to commit any offense against the United States, or to defraud the United States, or any agency thereof in any manner or for any purpose, and one or more of such persons do any act to effect the object of the conspiracy, each shall be fined under this title or imprisoned not more than five years, or both.

If, however, the offense, the commission of which is the object of the conspiracy, is a misdemeanor only, the punishment for such conspiracy shall not exceed the maximum punishment provided for such misdemeanor. 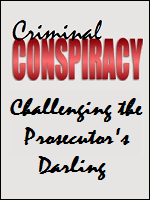 This 90-minute program will introduce the major evidentiary, elemental, and constitutional challenges that criminal defense attorneys face when their clients are charged with conspiracy in a federal case. It will also provide you with arguments and sources you can use to address these difficult cases. To provide context, the program will also provide a short introduction to conspiracy law, a history of the law, and proposals for reform. Purchase the DVD today!

Smith v. United States, U.S. Sup. Ct., No. 11-8976, case below 651 F3d 30, brief filed 8/27/12. Conspiracy—Defenses—Burden of Proof—Mens Rea. Amicus curiae brief of the National Association of Criminal Defense Lawyers. Argument: A defendant’s withdrawal from a conspiracy during the statute of limitations period negates an element of a conspiracy charge such that, once a defendant meets his burden of production that he did withdraw, the burden of proof rests with the government to prove beyond a reasonable doubt that he was a member of the conspiracy during the relevant period. The requirement that the prosecution prove the defendant’s guilt beyond a reasonable doubt is a defendant’s foremost safeguard against a wrongful conviction. The defendant’s withdrawal defense negated the “participation” element of the conspiracy, and relieving prosecutors of their burden to prove a defendant’s mental state substantially undermines the fairness of the trial by diluting one of the most important protections against wrongful convictions. Authors: Timothy P. O’Toole and Jeffrey Hahn, Miller & Chevalier, Chartered, Washington, DC.

Discussion of the federal conspiracy statute in the context of federal criminal code reform – February 28, 2014, Written Testimony of John D. Cline Before the Overcriminalization Task Force of the House Judiciary Committee

Discussion of the relationship between mandatory minimums and conspiracy - May 27, 2010, Written Statement of NACDL President Cynthia Hujar Orr Before the United States Sentencing Commission on "Mandatory Minimum Sentencing Provisions Under Federal Law"

Other Resources on Conspiracy

Martin H. Redish & Michael J.T. Downey, Criminal Conspiracy As Free Expression, 76 Alb. L. Rev. 697 (2013) (discussing and proposing a solution to address the conflict between the punishment of criminal conspiracy and the protections of the First Amendment). [Available on Westlaw]

Alex Kreit, Vicarious Criminal Liability and the Constitutional Dimensions of Pinkerton, 57 Am. U. L. Rev. 585 (2008) (examination of the Pinkerton doctrine and its implications for other areas of criminal law).

Pinkerton v. United States, 328 U.S. 640 (1946) (holding that a conspirator may be held liable for criminal offenses committed by a co-conspirator that are within the scope of the conspiracy, are in furtherance of it, and are reasonably foreseeable as a necessary or natural consequence of the conspiracy). [PDF]