Have an idea for a legal treatise? Interested in getting published through NACDLPress? Please submit proposals to Gerald Lippert at glippert@nacdl.org. 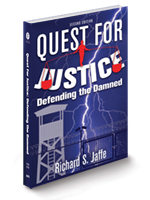 Quest for Justice: Defending the Damned (2nd Ed.)
By Richard S. Jaffe
Richard S. Jaffe’s explosive second edition of Quest for Justice: Defending the Damned affirms the vital role criminal defense lawyers play in the balance between life and death, liberty and lockup. It is a compelling journey into the legal and human drama of life or death criminal cases that often reads more like hard to imagine fiction, yet these cases are real. Quest for Justice invites readers into the courtroom and into the field with Richard Jaffe, a powerhouse Alabama defense attorney with more than four decades of experience, who has successfully defended hundreds of individuals accused of murder, including more than seventy cases where the defendant faced the death penalty, including the Olympic bomber Eric Robert Rudolph. According to the Equal Justice Initiative, in Alabama, nine people have been exonerated from death row—Jaffe represented four of them: James Willie “Bo” Cochran, Randal Padgett, Gary Drinkard, and Wesley Quick. Though every chapter reveals more alarming, gut-wrenching cases, and impediments to justice, Jaffe’s unwavering determination, hope, and strategies in the courtroom yield many momentous victories for his clients and the cause of justice. In Quest for Justice: Defending the Damned, Richard Jaffe offers all audiences an accessible, page-turning perspective borne out of a life representing the damned in America’s criminal justice system. AVAILABLE FOR PRE-SALE NOW. 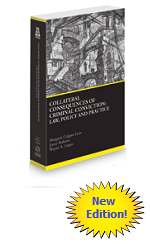 Collateral Consequences of Criminal Convictions: Law, Policy and Practice (2019 Edition)
By Margaret Colgate Love, Jenny Roberts & Wayne Logan
This volume is a comprehensive resource for practicing lawyers, judges and policymakers on the legal restrictions and penalties that result from a criminal conviction over and above the court-imposed sentence. This book covers general types of collateral consequences, attorney's duties regarding consequences, constitutional challenges to consequences, access to and the use of criminal records, regulation of employment and occupational licensing, and restoration of rights after a conviction. Historical background and future trends are discussed. Guidance is provided for defense counsel, prosecutors and judges in charging, counseling, plea negotiation and sentencing. 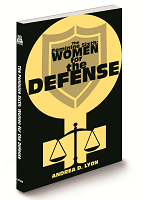 The Feminine Sixth: Women for the Defense
By Andrea D. Lyon
The Feminine Sixth: Women for the Defense probes the non-fiction accounts of being a woman criminal defense lawyer. Set at a fictional symposium held during Women’s History Month, nine accomplished lawyers reveal the unique ways in which they experience the criminal defense office, the courtroom, and their relationships with clients. With detailed insight into their personal and professional lives, this book illuminates the vital role and immense contributions of women in the profession. Each page invites the reader to travel through moments of justice and injustice, sorrow and joy, and failure and success. The Feminine Sixth: Women for the Defense offers an intimate story of those who tirelessly represent people accused of crime. 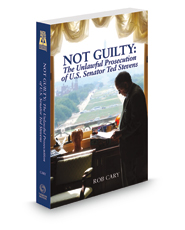 Not Guilty: The Unlawful Prosecution of U.S. Senator Ted Stevens
By Rob Cary
Written by one of the lead attorneys for U.S. Senator Ted Stevens of Alaska, Not Guilty: The Unlawful Prosecution of U.S. Senator Ted Stevens describes the litigation before, during, and after the trial charging Stevens with corruption. Stevens was found guilty by a jury, but the judgment was immediately overturned following revelations of gross violations of Brady and other misconduct by the prosecution team of the Public Integrity Section of the Department of Justice. The verdict, however, led to Stevens' loss of his seat in the Senate. The book is instructive in its intricate detailing of defense strategies and prosecutorial missteps, particularly in regards to Brady discovery, and author Rob Cary notes that less-privileged defendants commonly face challenges similar to those in the Stevens trial. Cary also comments on the Schuelke Report, a special investigation of the Public Integrity Section ordered by the trial court and released in 2012. As a result of his experience during the trial, Cary prescribes a number of initiatives to level the playing field between criminal defendants and the government, particularly with respect to discovery, handling of witnesses, and ways to address prosecutorial misconduct. 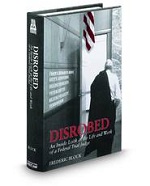 Disrobed: An Inside Look at the Life and Work of a Federal Trial Judge
By Frederic Block
Written for the legal community and the general public, this book explains in practical terms, the perspective behind some of the most newsworthy and sensational cases of the last 20 years. Few, if any, judges have commented on the cases that have appeared before them. Judge Block critiques some of the historical practices of the legislature and the bench; educates readers about the death penalty, racketeering, gun laws, drug laws, discrimination laws, race riots, terrorism, and foreign affairs; and intimates the more humble aspects of being on the bench, e.g. the choice to use humor, death threats against members of the bench, brushes with celebrities, witnessing how popular sentiment can override the facts of a case, racist underpinnings of the drug laws, and more. 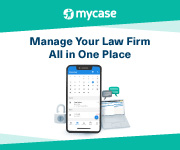