The decision to send a youth to the adult system is a very serious one. Juveniles are different from adults and should be treated as such. The juvenile system is more focused on rehabilitation and provides more support and opportunities for juvenile offenders compared to adult criminal facilities. Substantial research has concluded youth dealt with in the juvenile system are far less likely to commit new crimes than those tried as adults.

Roper v. Simmons (2004) - The United States Supreme Court ruled in a 5-4 decision that it is unconstitutional to impose the death penalty for a crime committed by a child under the age of 18, stating that it is "cruel and unusual punishment" prohibited by the Eighth Amendment.

Graham v. Florida (2010) and Sullivan v. Florida (2010) - The United States Supreme Court ruled that life without the possibility of parole sentences for juveniles convicted of nonhomicide offenses are unconstitutional.

J.D.B v. North Carolina (2010) - Under consideration in this case was whether a child's age is a relevant factor to consider in determining whether the child is in custody for purposes of Miranda v. Arizona. The United States Supreme Court ruled that a child's age must be considered by law enforcement in determining whether Miranda warnings need to be given to children during police interrogations. NACDL Amicus Brief

Miller v. Alabama (2012) - Under consideration in this case was the constitutionality of imposing life without parole sentences on juveniles convicted of homicide offenses. The United States Supreme Court ruled that "mandatory life without parole for those under the age of 18 at the time of their crimes violates the Eighth Amendment's prohibition on 'cruel and unusual punishments' and that a 'judge or jury must have the opportunity to consider mitigating circumstances before imposing the harshest possible penalty for juveniles.'"

Jones v. Mississippi (2021) - Under consideration in this case was the constitutionality of imposing a life without parole sentence on a juvenile that has not been found to be permanently incorrigible. In a 6-3 decision, the United States Supreme Court ruled that a sentencing authority is not required to find a juvenile permanently incorrigible before imposing a life without parole sentence. NACDL Amicus Brief 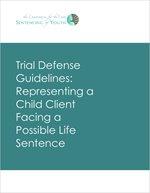 NACDL was pleased to assist in the development and sought subsequent Board approval of Trial Defense Guideline: Representing a Child Client Facing a Possible Life Sentence. This valuable resource provides defense attorneys with a standard in defending juveniles who are facing the possibility of a life sentence.

In November 2020, NACDL partnered with Human Rights for Kids and Legal Aid Justice Center to host Major Changes in the Sentences of Minors: Recent Legal Updates in the Sentencing of Youth in Virginia, a free webinar to teach stakeholders about new developments in the treatment of juveniles facing adult court prosecution. Legislation passed in 2020 established that judges are no longer bound by mandatory minimum sentences and are directed to consider trauma, developmental factors, and other experiences that distinguish the experiences of youth in our criminal legal system.

The second webinar series provides strategies for representing juveniles in adult court. Topics include Communicating with a Juvenile Client: JTIP Lesson on Interviewing and Counseling Youth; Incorporating Adolescent Brain & Behavioral Development Science into All Stages of the Criminal Proceeding; and Strategies for Keeping Youth out of Adult Jails and Prisons: Bail, Sentencing and Post-Sentencing Advocacy.

Both series were conducted in partnership with the National Juvenile Defender Center, the Juvenile Law Center, and the Campaign for the Fair Sentencing of Youth, supported by funding from the Foundation for Criminal Justice and the Ford Foundation.

There have been several significant advancements in legislation over the past year to transform state juvenile justice systems. In Utah, the passage of HB 262 raised the lower age of juvenile jurisdiction to eliminate the prosecution and incarceration of children under 12 years of age, instead requiring a formal diversion process. In Virginia, HB 744 established that a court can depart from any mandatory minimum sentence in cases where a juvenile is tried as an adult and convicted of a felony and established that the court must consider the differences between juveniles and adults and the juvenile’s exposure to adverse childhood experiences. With unanimous consent in both houses, Oklahoma passed HB 1282, which restricts the use of detention for children under the 15 years of age. Nebraska (LB 230) and Washington State (HB 2277) both prohibited juvenile solitary confinement as a form of punishment or retaliation, severely limited the use of room confinement for juveniles, and created stricter reporting requirements for any use of isolation.

In April 2021, three bills were introduced in Congress that would make significant changes to the juvenile justice system. H.R. 2834, introduced by Rep. Tony Cardenas (D-CA), would establish that parents must be notified when a child is arrested and require that the child consult with legal counsel before they can waive their rights and face custodial interrogation. H.R. 2908, sponsored by Rep. Karen Bass (D-CA), would set the minimum age of criminal culpability at 12 years of age and raise the minimum age that a child can be tried as an adult from 13 to 16 years of age. This bill would also repeal the felony murder rule for children, prohibit the placement of children in adult jails or prisons, and mandate data collection on children in the federal system. Finally, H.R. 2858, introduced by Rep. Bruce Westerman (R-AR), would allow individuals convicted of crimes as children to petition a judge for sentencing review after serving 20 years, thereby retroactively ending juvenile life without parole sentencing. The bill also allows judges to depart from mandatory minimums when sentencing youth and creates safeguards against harsh sentences for children who commit acts of violence against individuals who are sexually abusing them. To view more federal legislation that NACDL is tracking related to juvenile justice, visit NACDL's Legislative Action Center and click on 'View key legislation' under the heading 'Find Legislation.'