New York has undergone significant criminal justice changes in the past decade, from systemic challenges to public defense delivery systems in several of the state's counties to sweeping legislative overhauls of discovery and pretrial practices.  Many of these changes will have a significant impact on the state's public defense system, the community, and individuals who face criminal accusations.

Beginning January 1, 2020, a series of major criminal justice reforms will take effect in New York. Among other areas, the legislation passed in April, 2019, provides sweeping changes to New York's discovery rules and reshapes its bail process. NACDL has long advocated for reform in these areas and, as part of New Yorkers United for Justice, a coalition of numerous leading nonprofit organizations advocating for a more fair and humane criminal justice system in New York, NACDL and its state affiliate, the New York State Association of Criminal Defense Lawyers (NYSACDL), and others, worked to help bring about meaningful improvements to New York’s criminal justice system. Read NACDL's Press Release for more information.

Building on the historic work done together in support of ClemencyProject 2014, in 2017, NACDL and Families Against Mandatory Minimums (FAMM), with support from the Foundation for Criminal Justice (FCJ) partnered to create a state-focused clemency initiative. The first state to sign on was New York. Working with the governor's office to identify inmates seeking clemency, the Project's volunteer lawyers are trained and supported to assist eligible inmates present their petitions, helping those who have worked hard at rehabilitation have a second chance.

Learn more about NACDL’s commitment to the restoration of rights after conviction.

The use of trials has all but disappeared from the criminal legal system, eviscerating a key check on government abuse, overreach, and error. It is widely believed the main culprit in the decrease in trials is the “trial penalty”—the substantial difference between the terms of the prosecutor’s offer to resolve the case without a trial and the sentence one may receive if convicted of that same conduct. In an effort to understand the causes and impact of the trial penalty and identify was to end it, NACDL undertook a multi-year study of the issue in federal court, culminating in the 2018 publication of The Trial Penalty Report. But the impact of the trial penalty is not just felt in federal courts. Across the country states have developed their own system of levers, threats, and incentives to facilitate an accused waiving their right to trial and pleading guilty. To date there has been little examination of the state system. In 2018 working with our state affiliate, NYSACDL, NACDL launched the New York trial penalty project.

The first phase of the project requires your help. If you are a New York defense lawyer, please answer this short survey about your experiences. The survey will take 15 minutes of your time, and may save a client much more. https://www.surveymonkey.com/r/nytrialpenalty

In 2010 New York agreed to make substantial, systemic changes to its public defense delivery system in 5 counties. The settlement agreement came following a divided New York State Court of Appeals decision to reinstate the case of Hurrell-Harring v. New York, The Hurrell-Harring litigation challenged the public defense delivery system in 5 of New York's 57 counties, asserting it was inadequate to ensure the right to counsel, and it launched a wave of systemic public defense challenges that continue today. Most notably, the Hurrell-Harring Court recognized a cognizable claim for relief based on systemic flaws rather than individual case claims that arise in ineffective assistance of counsel cases, Read NACDL's Amicus Brief

In 2019 New York celebrated an important milestone. In the 4 years following the court's approval of the settlement agreement all 5 jurisdictions from the litigation were meeting the settlement conditions. 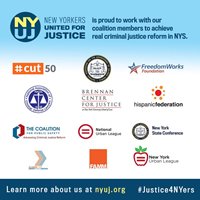 NYUJ is a collation of diverse nonprofit organizations led by two formerly incarcerated New Yorkers – Khalil A. Cumberbatch and Topeka K. Sam. NYUJ works to  bring urgent criminal justice reform to the state by pushing for bold legislative action to fix a deeply flawed criminal justice system that punishes the poor and communities of color, tears families apart, and makes communities less safe. NYUJ believes that a system that ensures equal access to justice for anyone accused regardless of age, race, ethnicity or social economic status, disability, veteran status, sexual orientation, gender identity or expression, national origin or religion, must be the standard.