Following disturbing reports of courts in which those accused of crimes were charged, prosecuted, and in some instances, incarcerated, without a lawyer, NACDL, in partnership with the ACLU and the ACLU of South Carolina sought to examine what was occurring first-hand. Over the course of 8 months organization representatives conducted observations in 27 summary courts throughout South Carolina. The observations were stunning. There were courts in which not a single lawyer laid eyes on a case. Arresting officers served as prosecutors,{1} 1 For more on police acting as prosecutors, see The Appeal Podcast: When Police Officer Double as Prosecutors, Oct. 31, 2019. judges meted out legal decision despite not being lawyers, and defendants were left wholly alone, as they were never even advised they had a constitutional right to a lawyer. These observations were documented in the 2016 report, Summary Injustice: A Look at Constitutional Deficiencies in South Carolina’s Summary Courts. 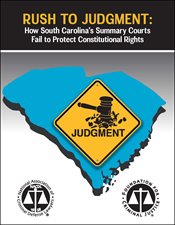 In the wake of NACDL's reports, South Carolina Chief Justice, Donald Beatty, recalled thousands of warrants issued against individuals with low-level offenses who were accused of missing court dates or not paying fees and fines imposed.

As well in 2017 the ACLU filed lawsuits in Beaufort, Bluffton and Lexington Counties.(NACDL News Release Oct. 20, 2017) Shortly thereafter the SC Supreme Court issued a memo to all magistrates requiring individuals be advised of their right to counsel if facing a potential term of incarceration. In March 2018 the US District Court denied Lexington County's Motion to Dismiss and the US Court of Appeals dismissed the county's appeal. A district court judge also denied the County's Motion to Dismiss in Beaufort County.{3} 3 Bairford v. City of Beaufort, 312 F.Supp 3d 503 (2018)

On October 9, 2019 the parties reached a settlement. The settlement agreement provides that both municipalities will change their practices to ensure meaningful representation for those appearing who are unable to afford counsel. Steps to be taken include contracting with the circuit's public defender office to provide counsel, providing written and oral advisement of the right to counsel to each person charged with an offense that carries the possiblity of a jail sentence, and an end to trials in absentia without counsel.