Although the Sixth Amendment assures counsel in all criminal prosecutions, current Supreme Court jurisprudence limits the types of cases in which a person is actually provided counsel and restricts the timing as to when that counsel must be present.

In all criminal prosecutions, the accused shall enjoy the right to . . . have the Assistance of Counsel for his defence.

The Supreme Court currently limits the reach of the Sixth Amendment to felony charges, and misdemeanor offenses for which an individual receives a term of confinement. To date the Court has declined to provide the protections of the constitution to misdemeanors which do not include a term of incarceration. {1} 1 Argersinger v. Hamlin, 407 U.S. 25 (1972), Alabama v. Shelton, 505 U.S. 654 (2002) This can include misdemeanors which do not carry jail sentences, as well as misdemeanor cases in which the court or the prosecutor waives the imposition of a jail sentence.{2} 2 Scott v. Illinois, 440 U.S. 367 (1970)

While the deprivations that accompany incarceration are significant, its absence does not diminish the need for representation. Constitutional protections against unreasonable searches and seizures, evidentiary rules which govern the admissibility of testimony, procedures to secure witnesses and records, and fundamental values including the presumption of innocence, do not disappear simply because the possibilty of going to jail does. Likewise, collateral consequences that impact everything from employment to education to housing, often apply without concern as to whether the individual received a jail sentence, paid a fine, or performed community service. Eliminating the provisions for counsel create a foothold for abuses, mistakes, and misdeeds to take root. 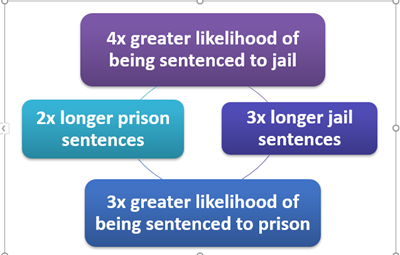 For those arrested, early hearings are a time in which decisions about liberty and detention are made. Besides the potential of losing your job, not being able to pay your rent, or becoming disconnected with mental health or medical treatment; early pretrial detention correlates with increased rates of conviction, longer jail and prison sentences, and elevated pre-trial and post-conviction re-arrest rates.{3} 3 LJAF The Hidden Cost of Pretrial Detention (2013)  Having counsel present at these initial proceedings improve bail outcomes, which in turn, improve case outcomes.

NACDL is committed to promoting polices and practices that preserve and protect the Sixth Amendment.

In 2008 NACDL advanced this position in its amicus brief in Rothgery v. Gillespie County[4] 4 Rothgery v. Gillespie County, 554 U.S. 191 (2008).Again in 2010 NACDL urged the recognition of early, engaged representation by counsel as a core tenant of a constitutionally effective public defense system in its amicus brief in Hurrell-Harring v. State{5} 5 Hurrell-Harring v. State, 15 N.Y.3d 8 (2010) In 2012 NACDL's Board of Directors formalized this position.

Resolution Urging the Right to Counsel at Initial Appearance

More on Counsel at First Appearance

The Right to Counsel National Campaign

Through a grant funded by the Bureau of Justice Assistance, and working in partnership with National Legal Aid & Defender Association and American University's Office of Justice Programs, NACDL participated in a three-year campaign designed to elevate the Right to Counsel through a campaign to inform policymakers, system stakeholders, and the public about the importance of the right, the ways in which it is not being implemented, and the ways in which each can help elevate the right to counsel within their jurisdiction.
The group's work included the convening of stakeholder and public focus groups to explore current views about the right to counsel, barriers impacting public defense services, and innovations occurring in the field. The results of these focus groups produced a number of guides and reports that can help promote a better understanding of and a more effective implementation of the Sixth Amendment.

More on the Right to Counsel Campaign