Washington, DC (Jan. 15, 2019) - The National Association of Criminal Defense Lawyers (NACDL) honored one of the most celebrated and prominent figures in popular music. Singer, songwriter, musician, producer, and political activist Stevie Wonder received the Champion of Justice Award on Thursday, January 10, at NACDL’s Race Matters II: The Impact of Race on Criminal Justice conference at the Millennium Biltmore Hotel, in Los Angeles.

“I am delighted to present the legendary Stevie Wonder, one of the most influential musicians of the modern era, with NACDL’s Champion of Justice Award,” said NACDL President Drew Findling. “Stevie Wonder has a long history of civic and humanitarian engagement, contributions, and leadership, including his work that helped make Dr. Martin Luther King Jr.’s birthday a national holiday, as well as his use of his extraordinary musical talent and popularity to raise funds for humanitarian aid for Africa as well as for AIDS-related charities. Over the years, Stevie Wonder has supported children in need, the disabled, the sick, the poor, and the disenfranchised, and so many more. Through his generosity and leadership, he has shown the world that whatever talents and skills each of us have, we can use them to fix a broken world that is in desperate need of repair and make it a better place for everyone.”

“Every person imprisoned unjustifiably makes you a prisoner too,” said Stevie Wonder upon receiving the award. “I thank you for giving your hearts and using your platform for fighting injustice.”

Stevie Wonder is recognized by the International Civil Rights Walk of Fame as one of “those courageous soldiers of justice who sacrificed and struggled to make equality a reality for all.” Equally laudable are his humanitarian efforts, philanthropic leadership, and generosity of spirit. Stevie has received 25 Grammy Awards, an Oscar, a Golden Globe, and is the youngest recipient of the Kennedy Center Honors. He is a Commander of France's National Order of Arts and Letters and has been inducted into, among others, the Rock and Roll Hall of Fame, the Songwriters Hall of Fame, and the NAACP Hall of Fame. He was awarded the Library of Congress' Gershwin Prize for Popular Song, the Nelson Mandela Courage Award, and the Lifetime Achievement Award from the Civil Rights Museum. He received the nation’s highest civilian honor, the Presidential Medal of Freedom, and is a designated U.N. Messenger of Peace with special focus on persons with disabilities. Stevie continues to be a pivotal influence in U.S. and world events, demonstrating the activism that has made him such a vital voice for social progress and world harmony. 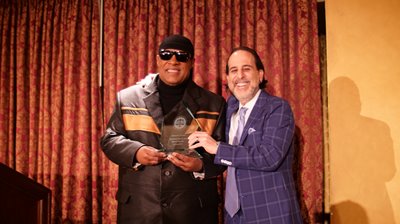