Litigation: Odonnell v. Harris County. (Full Case Pleadings and Amicus Filings)
In 2016 a federal class-action lawsuit was initiated raising due process and equal protection challenges to Harris County's monetary bail system as it relates to those accused of misdemeanor offenses. An injunction in favor of the plaintiff's was initially entered. On appeal the matter was remanded to the district court to narrow the injunction. Following the entry of a new, narrower injunction, 14 Harris County judges pursued an appeal of the ruling which mandated, among other things, that individuals unable to post a financial bond on a misdemeanor offense could not be held more than 48 hours. The appeal was withdrawn after all 14 judges were voted out of office in the county's 2018 election. The newly elected judges decided not to continue the appeal. The terms of the settlement are pending approval from the federal court.{1} 1 892 F.3d 147 (5th Cir. 2018), see also, 251 F. Supp. 1062 9S.D. Tex. 2017)
A similiar suit is pending in Galveston, Texas. In May the federal district court certified the case could proceed as a class action. That determination is currently on appeal. Booth v. Galveston County. 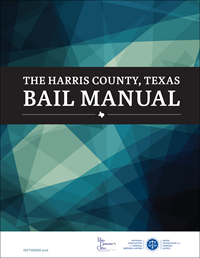 While the litigation was pending, Harris County implemented the use of the Arnold Foundation's Public Safety Assessment (PSA), risk assessment tool. As the PSA implementation began, so too did the practice of having public defenders present for initial bail hearings. To assist defenders in navigating this conflucence of events, NACDL, in partnership with the Harris county Public Defender's Office, and supported by a grant from the Bureau of Justice Assistance. published The Harris County Bail Manual.

Texas Public Defense in the News:
How judicial conflicts of interest are denying poor Texans their right to an effective lawyer