Concerned about the number of individuals detained in New Jersey's jails because they lacked the resources to post bail as well as the disparate impact the state's current pretrial system was having on black and Latinx populations, in 2013 the New Jersey Supreme Court established a special committee to consider potential reforms. Their recommendations led to legislation which overhauled the NJ pretrial system. It included a constitutional amendment permitting certain individuals to be detained without bail, included the adoption of a statewide risk assessment tool (the PSA) and decision-making framework, an increase in the use of summons for minor offenses, and re-oriented thinking so that an emphasis was placed upon the use of non-monetary conditions of release.

In the years that have followed, data indicates significant success, with NJ's pretrial population falling significantly, without any significant increase in rates of non-appearance for court or of re-arrest, although issues of racial disparity remain. See 2018 Report to the Governor and Legilsature for data. 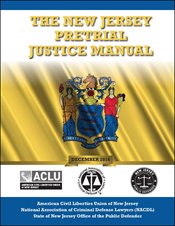 To help defenders utilize the new statutory provisions, understand the data and limitations of the PSA and to advocate effectively for their client's pretrial release, NACDL, in partnership with the ACLU of New Jersey and the New Jersey Office of the Public Defender, under a grant from the Bureau of Justice Assistance, created The New Jersey Pretrial Justice Manual.

Interrogation Policies in this State