For years attention has been drawn to the growing crisis in Louisiana’s criminal legal system. A combination of underfunding, overzealous and questionable prosecutorial practices, and unjust practices have led to overflowing jails and prisons, wrongful convictions, and a broken public defense system. Efforts at bringing about reforms have met with mixed success 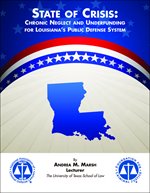 In 2016 NACDL began a year-long examination of Louisiana’s public defense system. The report, State of Crisis: Chronic Neglect and Underfunding for Louisiana’s Public Defense System (2017), provides context for the state’s public defense crisis and offers recommendations for reform, including:

In 2017 Louisiana undertook a number of reforms targeted to reduce its prison population. While the state’s incarceration population is decreasing (and for the first time in 2 decades, it is not the nation’s highest per capita incarceration rate), those reforms failed to meaningfully touch the state’s public defense system. Almost wholly reliant on local funding, Louisiana’s public defense attorneys continue to struggle under massive caseloads, with inadequate resources. They are continually pushed to the brink, facing “restrictions of service” which leave Individuals facing criminal charges on months long wait lists. Many of those awaiting the assignment of counsel are incarcerated without an attorney to advocate for their release or to investigate their case

In 2018, a grassroots campaign led to Louisiana voters repealing a Jim Crow era statute allowing for felony convictions by non-unanimous juries (Oregon is the only remaining state to permit the practice) and the U.S. Supreme Court has agreed to hear the appeal of Evangelisto Ramos. In 2014 Ramos was convicted of murder and sentenced to life in prison by a non-unanimous jury. NACDL filed an amicus in support of Ramos.

In 2019 the Louisiana legislature contemplated HB131, which would have required defense attorneys and their agents to “unequivocally” identify themselves, advise victims of their right to refuse an interview with the defense, to petition the court before being able to subpoena a victim to court, and face criminal prosecution if they fail to comply with the statute. The bill, which only applied to the defense, would serve to chill defense investigations, overburden an already faltering public defense system, and undermine the core defense functions. At the same time, the Orleans Parish District Attorney was utilizing fake subpoenas and threats of incarceration to compel witnesses to speak with prosecutors. In the days leading up to the Senate’s vote on the bill, NACDL submitted a Letter in Objection, outlining the chilling effect of the bill and highlighting existing ethical obligations which protect against attorneys engaging in misrepresentations. The bill overwhelming failed in the Senate.

Allen v. Edwards: (Filed Baton Rouge, LA 2017) Class action lawsuit alleges the denial of the right to counsel by operating a system that is underfunded and overburdened and calls for an effective statewide defense system.The case is pending.

Too Many Letters from Jail: Justice Reform as the Civil Rights Movement of Our Time, by Derwyn Bunton, Orleans Parish Public Defender, The Champion, Jan/Feb 2018

Interrogation Policies in this State 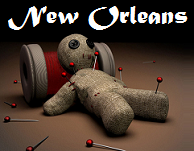