According to the Prison Policy Initiative, "[t]he American criminal justice system holds almost 2.3 million people in 1,719 state prisons, 109 federal prisons, 1,772 juvenile correctional facilities, 3,163 local jails, and 80 Indian Country jails as well as in military prisons, immigration detention facilities, civil commitment centers, state psychiatric hospitals, and prisons in the U.S. territories." These are not fixed populations. As recently as 2017, according to the Bureau of Justice Statistics (BJS), more than 10 million people a year, or close to 1 million people a month, are admitted into America’s jails alone — jails that averaged an overall weekly inmate turnover rate of 54%. Some 20% of America’s jails operated at or above 100% capacity at mid-year 2017. And according to a 2015 BJS special report, a 2011-12 survey revealed that "an estimated 40% of state and federal prisoners and jail inmates reported having a current chronic medical condition[.]" The far-reaching challenges presented by the coronavirus pandemic not only implicate the health, safety, and welfare of more than two million incarcerated individuals, but also extend to the functioning of America's courts, individuals' access to counsel, and concerns about eroding liberties in this nation, among other matters.

On this Coronavirus Resources page, NACDL is aggregating its statements and messages; motions, pleadings, rulings, and other court papers related to COVID-19 and at-risk clients; advocacy letters on which NACDL is a signatory; various resources from across the criminal justice community; and news of interest on the intersection of criminal justice and the coronavirus. Indeed, on this page you will find sections linking to End Incarceration's tracking of changes to incarcerated populations across the country, Courthouse News Service's and the Brennan Center for Justice's tracking of changes and responses of federal and state courts nationwide, and The Marshall Project's tracking of prisons' responses to the virus, including changes to visitation rules, among many other resources.

NACDL has created this Coronavirus Resources page as a public service and thanks its members and others who provided motions, pleadings, rulings, and other court papers that other attorneys can use in their advocacy on behalf of their at-risk clients in the context of this pandemic. In addition, NACDL thanks the numerous organizations who have posted the useful resources that are linked to here.

This page is a living resource that will be constantly updated. If you know of or have resources to share (of the nature included on this page) that you think would be useful to criminal defense lawyers and criminal justice reform advocates, as well as the media and the public, please send them to NACDL Senior Director of Public Affairs and Communications Ivan J. Dominguez at idominguez@nacdl.org.

Disclaimer: This Coronavirus Resources page provides practice material submitted or shared by members and non-members of NACDL, as well as external links to reliable sources, and more. NACDL does not endorse or verify the content of third party materials posted here and advises all to check that the law is current and relevant to their jurisdiction.

Be part of the change now. Have an impact on tomorrow.

Help us to reform the criminal justice system during this crisis and beyond.

Be part of NACDL

Donate to the NFCJ

Motions, Pleadings, Rulings, and Other Court Papers Related to Covid-19 and at-risk Clients

Attempts to Shut Down Lawyers

Centers for Disease Control and Prevention

No Kids In Prison

NYU School of Law Center on the Administration of Criminal Law 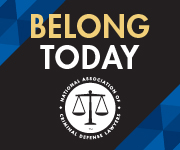 When you belong to NACDL, you take a stand for a fair, rational, and humane criminal justice system.