On Monday, May 16, 2022, NACDL and IACDL hosted "A Night Under the Stars", a benefit supporting the NACDL Foundation for Criminal Justice.  It was an evening of entertainment, open bar, food and fun while we celebrated heroes of the Defense Bar. 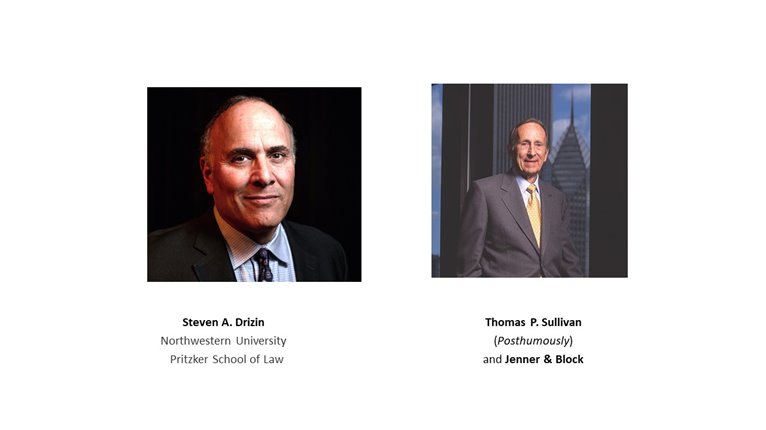 More information about our honorees can be found below.

The evening's event was held at the beautiful home of Leonard Goodman in the Lincoln Park neighborhood in Chicago, Illinois. , 3000 N. Lake Shore Drive, Chicago. And the evening included live music from The Exoneree Band! The five men that make up the Exoneree Band spent a combined 107 years in prison for crimes they did not commit. They have joined together to help elevate the issues that plague our legal system while entertaining and spreading their stories. If you have the opportunity to book them at an event, DO!

A list of sponsors can be found here. Thank you all!

Thomas (Tom) Sullivan was a defense attorney for most of his career, Tom co founded a pro bono program and started representing indigent defendants charged with violent crimes. He became a partner at Jenner and Block in 1963 and continued this work until being appointed as US Attorney for the Northern District of Illinois by President Carter and served for four years.About the honorees:

He argued many cases in the Illinois Supreme Court, the US Supreme Court, and many federal Courts of Appeal. He served as co-chair of Illinois Governor George Ryan's Commission on Capital Punishment (2000-02) and the Illinois General Assembly;s Capital Punishment Reform Study Committee, whose reports recommending sweeping changes to Illinois homicide law and procedure were influential in Governor Ryan'ss decision in 2003 to clear Illinois' death row and Governor Quinn's signing the bill abolishing Illinois&rsquo; death penalty in 2011. Over the last 20 years of his career, he dedicated his time to pro bono representation including representing prisoners incarcerated at Guantanamo Bay, Cuba.

A true partner, Jenner & Block has co-authored more than 8 briefs with NACDL within the past few years. Jenner has provided thousands of hours of pro bono support to NACDL initiatives that help those serving overly harsh sentences seek relief through clemency, compassionate release, or expungement. In addition, Jenner has generously supported the NACDL Foundation for Criminal Justice throughout the years and remains a trusted friend and ally.

Steven A. Drizin is the William M. Trumbull Clinical Professor of Law and Co-Director for the Center on Wrongful Convictions at the Northwestern Pritzker School of Law where he has been on the faculty since 1991. He served as the Legal Director of the Clinic's renowned Center on Wrongful Convictions from March 2005 to September 2013. At the Center, Professor Drizin's research interests involve the study of false confessions and his policy work focuses on supporting efforts around the country to require law enforcement agencies to electronically record custodial interrogations. Drizin co-founded the Center on Wrongful Convictions of Youth (CWCY) in 2008, the first innocence organization to focus on representing defendants who were only teenagers when they were wrongfully convicted. Drizin and former student Laura Nirider, who co-directs the CWC, represent Brendan Dassey, a central figure in Netflix's smash docuseries Making a Murderer.

Prior to joining the Center on Wrongful Convictions, Drizin was the Supervising Attorney at the Clinic's Children and Family Justice Center where he built a reputation as a national expert on juvenile justice related issues. He was a leader in the successful effort to outlaw the juvenile death penalty and co-wrote an amicus brief in Roper v. Simmons, the United States Supreme Court's decision striking down the juvenile death penalty as unconstitutional. In August 2005, Drizin received the American Bar Association's Livingston Hall Award for outstanding dedication and advocacy in the juvenile justice field. Drizin received his BA with Honors from Haverford College in 1983 and his JD from Northwestern University School of Law in 1986 where he was the Editor-in-Chief of The Journal of Criminal Law and Criminology.

About the NACDL Foundation for Criminal Justice

The NFCJ supports the charitable work of NACDL, and includes the following:

NACDL endeavors to foster a working, learning, and social environment free of harassment, discrimination, intimidation, and insult. To that end, NACDL has adopted a Code of Conduct for Affiliated Persons that applies to all attendees and participants of any kind at all NACDL sponsored events.