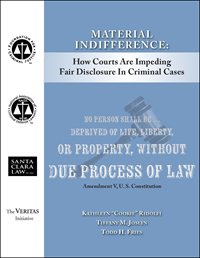 In courtrooms across the nation, accused persons are convicted without ever having access to, let alone an opportunity to present, information that is favorable to their defense.

The frequency with which this occurs and the role it plays in wrongful convictions prompted NACDL and the VERITAS Initiative to undertake an unprecedented study of Brady claims litigated in federal courts over a five-year period. The Study asked: What role does judicial review play in the disclosure of favorable information to accused? The results revealed a troubling answer—the judiciary is impeding fair disclosure in criminal cases and, in doing so, encouraging prosecutors to disclose as little favorable information as possible.

To receive an electronic copy of the study data please contact NACDL's Director of Economic Crime & Procedural Justice, Nathan Pysno, at 202-465-7627 or npysno@nacdl.org.

Media inquiries should be directed to NACDL’s Senior Director of Public Affairs & Communications, Ivan J. Dominguez, at 202-465-7662 or idominguez@nacdl.org.