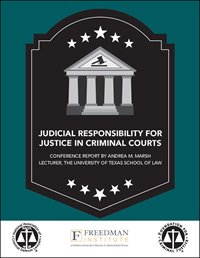 On April 6, 2017, the Monroe H. Freedman Institute at Hofstra University’s Maurice A. Deane School of Law hosted a conference called Judicial Responsibility for Justice in Criminal Courts. The conference brought together judges, prosecutors, defense attorneys, scholars, and criminal justice policy experts for a day of interactive panels on procedural justice, bail, implicit bias, deficiencies in the right to counsel, sentencing, and changing court culture. The goals of the program were to identify barriers to justice in overburdened and underfunded state and local criminal justice systems and to explore practical reforms to improve the quality of justice delivered by judges in those courts. The program had a particular focus on high-volume misdemeanor courts, where concerns for speedy disposition too often lead to curtailing of due process rights for the accused, and defendants may appear at critical stages of the case without the benefit of counsel.

NACDL, in furtherance of its mission to improve justice and due process, was a co-sponsor of the event. NACDL has published numerous reports detailing many of the same problems that were explored during the program and has been a champion for public defense and court reform over the years. Additional co-sponsors were the Foundation for Criminal Justice, the Association of Prosecuting Attorneys, the Center for Court Innovation, and the New York Office of Court Administration. The planning committee included judges who are board members of the American Judges Association and the National Center for State Courts.

The conference was followed by a day of discussion sessions to explore recommendations for best practices. Many of the judges who participated in the October 2016 Right to Counsel judicial roundtable hosted by NACDL and the Justice Programs Office at American University were able to participate in the conference and the discussions that followed. In small groups, criminal justice stakeholders and experts considered tough topics including the judge’s responsibility to safeguard defendants’ rights when they lack counsel, such as at first appearance and bail-setting where the right to counsel is not firmly established, or in systems where defense lawyers are so overburdened that they cannot ethically handle the cases.

More information about the program and materials can be accessed at the Hofstra site.