With hourly rates that may have remained unchanged for decades, fee caps that fail to adequately account for the amount of time constitutionally and ethically effective representation requires, and delays in payment that can leave lawyers uncompensated for months after their representation concludes, the assigned counsel payment structures in many jurisdictions undermines notions of justice and equity in the criminal legal system.

NACDL is committed to insuring court-appointed counsel are fairly and timely compensated for their work as well as promoting practices which provide these attorneys with access to training, investigators, experts, and other support services needed to fulfill their responsibilities to their clients.

In 2018 the Tennessee Supreme Court considered changes to its assigned counsel compensation ($40 per hour for out of court work and $50 per hour for time in court.) The Court's proposal was to eliminate the distinction between out of court and in court work, creating a universal $50 per hour rate. While important to value investigation, research, and client contact as much as courtroom time, the rate was still woefully inadequate. The $50 rate, low when first set in 1994, nearly twenty-five years later had grown to be abysmal. The year before the Tennessee Indigent Defense Representation Task Force in its report, Liberty & Justice for All: Providing Right to Counsel Services in Tennessee, called for the rate to be at least $75/hour.

NACDL, in partnership with the Tennessee Association of Criminal Defense Lawyers (TACDL), filed a joint statement encouraging the Court to amend the court rule to assure all those represented by public defense attorneys have counsel who are sufficiently resourced, supported, and trained, have caseloads that allow them to provide meaningful representation at all stages of the proceedings, and are adequately compensated to assure that counsel may fulfill all their ethical and legal obligations to their appointed clients. Unfortunately the Court only adopted its initial rule, creating a universal $50/hour rate.

Wisconsin has long had the lowest statutory assigned counsel rate in the nation at $40 per hour, a rate unchanged for two decades. In May 2017, the Wisconsin Association of Criminal Defense Lawyers (WACDL) and others filed a Petition to Amend Supreme Court Rule 81.02 to raise the hourly rate, require the rate track cost of living increases, and bar jurisdictions from utilizing low-bid, flat fee contracts.

NACDL filed a comment in support of the effort and Executive Director Norman Reimer traveled to the public hearing on the matter to lend testimony about the Court's authority and obligation to ensure a fair wage for court appointed counsel.

After reviewing the comments and testimony, the Court entered an order, raising it's own assigned counsel rate from $70/hour to $100/hour but declined to address the state's $40 per hour rate.

The low rates have exacerbated a shortage of lawyers, especially in Wisconsin's rural communities, leaving defendants without attorneys assigned to their cases for weeks or even months at a time.

Promisingly, Wisconsin’s 2020 budget raises the state assigned counsel rate to $70/hour, but given the Supreme Court’s recent conclusion that its own $70/hour rate was insufficient (and raising its rate to $100/hour), the new rate is still far short of sufficient and may not fully address other structural shortcomings in Wisconsin’s current system. NACDL continues to monitor developments in the state. 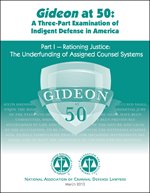 Learn more about assigned counsel rates nationally in NACDL's Gideon at 50 Series Part I: Rationing Justice: The Underfunding of Assigned Counsel Systems. Released in March 2013, the report is a comprehensive review of assigned counsel compensation rates in each of the 50 states.