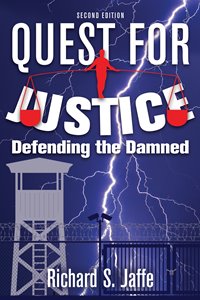 Quest for Justice: Defending the Damned is one of those books that makes you proud to be a criminal defense lawyer. It should occupy a place of honor on your bookshelf alongside Sister Helen Prejean’s two books The Death of Innocents and Dead Man Walking as well as Bryan Stevenson’s Just Mercy.

Richard Jaffe is a long-time criminal defense lawyer from Alabama who has handled approximately 70 capital cases at the state and federal levels. This is in addition to scores of other cases in a variety of other areas from misdemeanors to white collar criminal defense. He began by taking court-appointed work, and his commitment to indigent defense continues to this day.

In 2012, Jaffe published the first edition of Quest. As he points out in the second edition, criminal justice in general and death penalty litigation in particular have undergone “seismic changes.” As of this writing, there have been 167 death row exonerations, numerous jurisdictions have enacted death penalty moratoriums, juries have handed down significantly fewer death sentences, and the flaws of forensic science have been exposed. Jaffe also adds stories from his own practice that happened after 2012.

But the heart of the book remains the same: Jaffe’s story as a young graduate from the University of Alabama School of Law whose lifelong dream was to become a criminal defense lawyer. Jaffe started out as an assistant attorney general in Montgomery, learning his craft. He opened his own practice and quickly built a reputation as not only a competent lawyer, but also as one who treated his clients with respect. This led to a judge’s appointing him in 1982 to handle the appeal of a man who had been sentenced to death — an appointment for which the young, reluctant Jaffe believed himself unqualified.

Quest is filled with the stories of Jaffe’s clients and their families, and each story illustrates one or more problems of the criminal justice system: prosecutorial misconduct, faulty eyewitness identification, juveniles prosecuted as adults, the lack of adequate funding for indigent defense and court-appointed experts, the criminalization of mental disabilities, and the history of racial prejudice that permeates the Deep South.

The second edition also contains new chapters such as “Racial Realities,” “The Human Costs of Tinkering with the Machinery of Death,” and “The End of the Death Penalty in the U.S.” Also added is an expanded treatment of the capture and eventual plea of convicted abortion clinic bomber Eric Rudolph, which now includes the conflict within the defense team. Finally, the second edition contains a discussion of reforms that Jaffe believes are sorely needed by the criminal justice system such as grand jury reform, elimination of cash bail, and the recording of police interrogations from beginning to end.

Make no mistake: Quest is not a series of war stories. Key concepts such as the rationale behind the presumption of innocence and how jurors are selected in death penalty cases are explained, which would enable someone who is not a lawyer to understand and enjoy the book. Moreover, a new lawyer could also benefit from the courtroom insights Jaffe has developed over the years such as “jurors expect to hear perfection from defense witnesses.”

Jaffe thinks deeply about the implications of his actions and how the system can be made fairer and more just. For example, one of the more colorful episodes in the book concerns former Judge Jack Montgomery, who made a mockery of courtroom decorum and who, at his most unstable, lifted a gun from his robe and pointed it from the bench in his own courtroom. The judge was later indicted for taking bribes. Jaffe reflects on this sordid chapter:

Out of either fear or complacency, we unwittingly supported his intolerable behavior. Thus, we had acquired some ownership that we now had to face in the remnants of his infamy. The distance we tried to place between him and us did not shroud our silence and must have contributed to his remaining a judge in good standing who obviously felt invincible. ... We had shirked our duty to police our own. We had created a protective shield of encouragement that empowered the monsters and demons swirling inside his head. (p. 128)

Experienced criminal defense lawyers will enjoy the courtroom drama and relate to many of Jaffe’s frustrations and triumphs. But perhaps more importantly, law students and new lawyers searching for meaning in their work can look to Quest as a testament to how one devoted lawyer can make a difference.

Elizabeth Kelley (NACDL Member) has a nationwide practice specializing in representing people with mental disabilities. She is the editor of Representing People with Autism Spectrum Disorders: A Practical Guide for Criminal Defense Lawyers.