David Anthony Taylor was a low-level participant in a group that carried out 10 robberies. He participated as a human shield in three of them, and had no involvement in the other seven. The other low-level participants received sentences of 7-14 years. But because he went to trial Taylor was sentenced to 28 years, 2-4 times what equally culpable defendants received and 6 years more than the 22-year sentence imposed on the mastermind of all 10 robberies.

Gil Lopez was the chief accounting officer of a financial group that engaged in fraud. James Davis, the chief financial officer, was indisputably far more culpable than Lopez and agreed to testify against Lopez and the architect of the fraud. Lopez himself sought a plea, but because Davis got to the prosecutors first, he had no information to trade and no formal offer was made. Lopez was convicted after trial. Davis, who was rewarded for his testimony, was sentenced to five years in prison. At the age of 70, and even though he was far less culpable, Gil Lopez was sentenced to 20 years.

Michael Marshall pled guilty after being charged with aggravated assault, armed robbery and related offenses and was threatened with decades in prison. He was sentenced to four years in prison for theft. He later received help from the Georgia Innocence Project after writing that he pled guilty because he was scared of the possible sentence if he went to trial. Subsequent DNA testing exonerated Michael Marshal. He was in fact innocent of the crime to which he pled guilty.

What do these cases have in common? They are all searing examples of a phenomenon known as the trial penalty: the vast network of laws and practices that have turned the criminal justice system into a guilty plea factory. So powerful is this penalty that even innocent accused persons will succumb to the threat of a vastly worse outcome if they dare to risk the exercise of the fundamental right to a trial. The National Registry of Exonerations has now identified 404 of more than 2200 cases in which individuals later determined to have been innocent had entered a guilty plea rather than face trial.1 And in the lower criminal courts of this nation, where millions of misdemeanor cases are brought every year, individuals who face a bail they cannot afford, or must wait weeks for the appointment of a lawyer, routinely plead guilty, notwithstanding the life-altering consequences that result from a conviction.

With scant attention, and hardly any outcry, a precious and fundamental right is on the verge of extinction. The right to a trial, while alive in principle, is on life support in practice. It is now generally recognized that fewer than three percent of all criminal cases result in a trial, and perhaps even less when considering only misdemeanor charges. NACDL is determined to revive this basic right, and confront and reform the multitude of systemic factors that have made the risk and cost of a trial so extreme than even rational, innocent individuals routinely plead guilty. 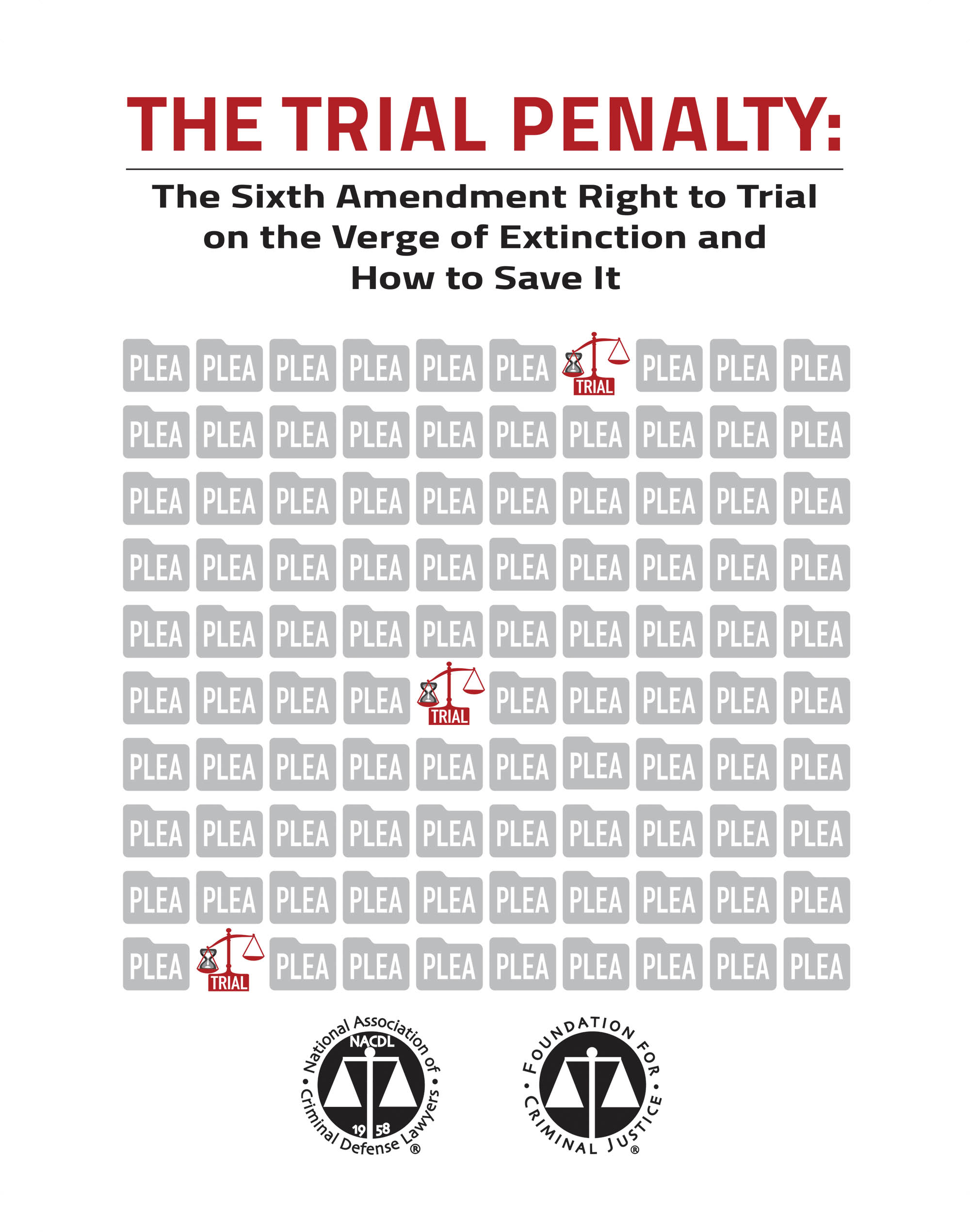 On July 10, 2018, NACDL published The Trial Penalty: The Sixth Amendment Right to Trial on the Verge of Extinction and How to Save It. The report documents the trial penalty in federal prosecutions, and articulates a set of principles and reform recommendations all designed to vindicate the right to a trial by minimizing the coercive impact of the trial penalty.2 The Trial Penalty reflects a remarkable collaboration among numerous entities, all determined to understand and redress the phenomenon of the trial penalty. NACDL’s members and many clients contributed to this effort, as did various leaders and a magnificent team of volunteers from a major law firm.3 Indeed, readers of this column played a role in the development of this report. In fall 2013, NACDL announced its determination to expose the trial penalty, and asked readers to provide examples that could be used illustrate the abusive application of the trial penalty.4 Many of you responded, and those stories are reflected in the final report. Collectively they paint a picture in which the adversarial system is so out of balance that prosecutorial control of the criminal justice system has effectively annihilated a fundamental right. By extracting a litany of waivers as a condition for a favorable plea, it is not just the right to a trial that is lost, it is also the right to challenge unlawfully obtained evidence and the right to obtain discovery, and the ability to expose abusive policing practices and prosecutorial abuse of the criminal process that can only be revealed through the crucible of a trial.

Every lawyer who engages in criminal defense practice knows that all too often geometrically increased penalties will be imposed if a client unsuccessfully chooses to fight a case. Ethics require that lawyers seek out the best possible offer and convey it to their clients. Responsible and moral practice often requires counsel to urge even those who may prevail at trial to seriously consider these offers. How could one not do that if a client facing many years or decades can receive a far lesser sentence? A parent of young children could miss seeing them grow up. An accused with parents may not be there for them as they age and wither. From this defense attorney’s perspective, the single greatest fiction in the criminal justice system is the nearly farcical moment in a plea allocation when the accused is asked if anyone has threated or coerced him into pleading guilty. In many cases the honest answer would be yes: the prosecutor-dominated system itself has coerced the guilty plea. But that truthful answer is a one-way street to the dreaded trial penalty.

The release of this report marks the beginning of a new chapter in NACDL’s advocacy to restore fairness and rationality to the criminal justice system. While The Trial Penalty focuses on the federal system, the problem exists in virtually every state. In the coming months and years, NACDL will partner with its affiliates and other groups across the ideological spectrum to rehabilitate the right to a trial. The stories must be told. The public must be shown the tyranny of the trial penalty. A grassroots reform movement is essential. The opening paragraph in this groundbreaking report underscores the urgency of the challenge:

In the words of John Adams, “[r]epresentative government and trial by jury are the heart and lungs of liberty. Without them we have no other fortification against being ridden like horses, fleeced like sheep, worked like cattle, and fed and clothed like swine and hounds.”5 President Adams’ colorful language reflected the strength of his view — a view shared by his contemporaries — that the right to trial by jury protects our liberties every bit as much as the right to cast votes for our representatives.

NACDL hopes to ignite a reform movement that will mobilize the entire criminal defense community, as well as all who recognize that the interposition of the citizen between the state’s prosecutorial power and the individual is a critical check on the abuse of power.

Norman L. Reimer is NACDL’s Executive Director and Publisher of The Champion.