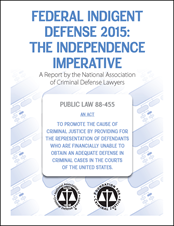 On the heels of the 2013 federal budget crisis, NACDL convened its Task Force on Federal Indigent Defense to examine the impact of sequestration, as well as  the overall structure of the federal public defense system, the Task Force conducted an extensive review of the system, its development, and current operations. Over the course of 18 months, 130 people representing every judicial circuit and 49 states were interviewed, and countless reports, memoranda, and correspondence was reviewed.

The Report, Federal Indigent Defense 2015: The Independence Imperative,  documents the history of the federal public defense system, which from its very founding was meant to be wholly independent of judicial control. It exposes the depth and breath of judicial entanglement with the defense function, from controlling budget requests to Congress to selecting the leaders of public defender offices to deciding how much money individual court-appointed attorneys will be paid, the judiciary exerts outsized power over the nation's public defense system. The results of the judiciary's pervasive control can be found throughout the country and throughout the court process.

Read the Report Review the Documents

Upon the completion of its work, NACDL's Task Force identified 7 Fundamentals of a Robust Federal Indigent Defense System:

But before the report was released, the Judicial Conference announced the formation of an Ad Hoc Committee to conduct a "comprehensive and impartial review of the Criminal Justice Act program."{1}{1} CJA Study Flyer.

In the Fall 2018, after calls from NACDL and others for the Committee's work to be made public, the Committee's Report was released. Its unanimous recommendation: that Congress create an independent Federal Defender Commission outside the oversight of the Judicial Conference.

Recognizing the road to independence is complex, the Committee made 39 interim recommendations; the Judicial Conference approved 19 urging its Fall 2018 meeting. Among those is a more uniform standard for judicial review of panel attorney vouchers.

NACDL continues to monitor the efforts to bring about systemic changes to the federal public defense system.