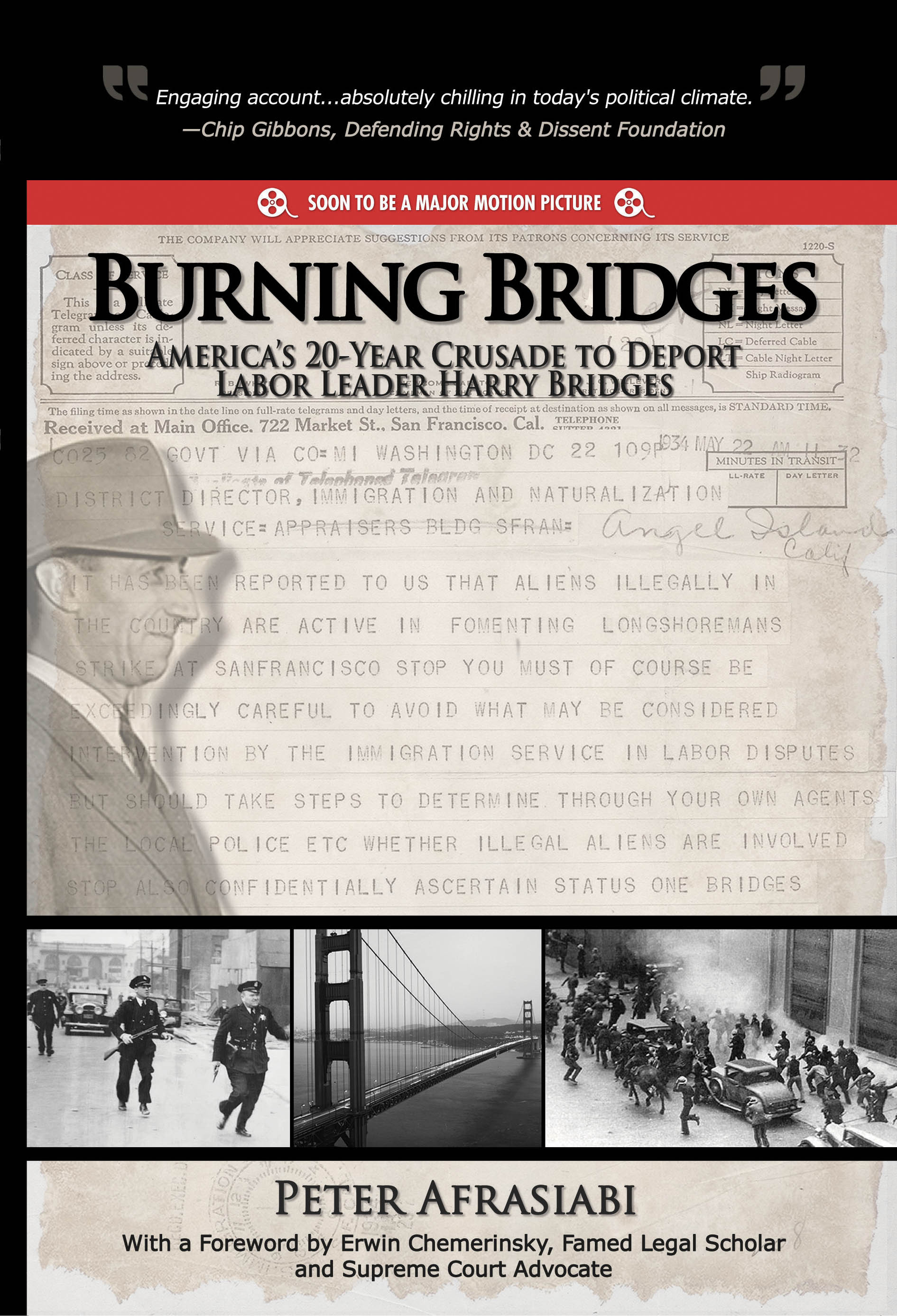 Once upon a time, the name Harry Bridges was well known in America. He was a labor leader of great renown on the West Coast. Dedicated to fair working conditions for dockworkers, he was instrumental in establishing the International Longshoremen’s Association and later the International Longshore and Warehouse Union. Almost from the day he arrived in America as a 19-year-old, he met with adversity from his employers and from the government, which he faced with persistence and humility. Curiously, folks do not speak much of Harry Bridges anymore. But, as Peter Afrasiabi illustrates in his compelling new book, Burning Bridges: America’s 20-Year Crusade to Deport Labor Leader Harry Bridges, they should.

Spurred by his favorite author, Joseph Conrad, and his own Uncle Harry (whose name he co-opted), Bridges left home as a teenager through the Merchant Marine. It was 1920 when the Australian landed in California and transferred his union membership to the American Federation of Labor Sailors Union of the Pacific. He sailed on American ships for a year before becoming involved in a strike in New Orleans that effectively ended the AFL Sailor’s Union. Bridges applied for American citizenship and ultimately found work on the docks in San Francisco. At that time, dockworkers were forced to vie for jobs in a “shape up” where they would line up to be selected for work by corrupt hiring bosses — many, if not all, of whom were taking kickbacks. Equally appalling was the “speed up” whereby men would work — sometimes up to 36 hours in a row — offloading cargo. The brutality of the working conditions and horrendous hiring methods became the catalyst for the development of a strong union. Developing and militantly defending that union would be the foundation of Harry Bridges’ life. But this is as much a tale of a labor leader as it is of an immigrant seeking citizenship and permanence in America.

Burning Bridges deftly follows the improbable course of this unassuming man’s journey through the prism of the trials he faced. There are parallel stories woven into the book. One story is the account of Harry Bridges the labor leader, the course of the labor movement in the 1920s, 30s and 40s and its intersection with the Communist Party. There is the story of Harry Bridges the immigrant who was denied citizenship at nearly every turn. Another story reveals how immigration issues once were labor issues until they became crimes. Yet another story describes how political sentiment and rhetoric can dictate the course of individual lives. Afrasiabi’s book also shows American jurisprudence at its worst, with biased judges and dishonest prosecutors intent on winning rather than doing justice. Readers will also encounter the story of how the courts can be salvation. There is, throughout, the story of the struggle of one man whose trials and tribulations would prompt America to live up to its commitment as a promised land.

Telling too many of the details from the court proceedings the book explores would take away from the fun of reading about them. Unfortunately, the author does not develop the characters sufficiently and the reader is left wanting to know more about the people involved. But, this is a minor flaw; NACDL members will still see their best selves in Bridges’ lawyers as they recognize familiar, dreaded opponents in the government lawyers. And, as signs of authoritarianism grow in today’s republic, we are reminded of the unheralded, but supremely important, role of defense attorneys, law, justice, and honor in our democracy.

Afrasiabi takes us through 20 years and four trials and two trips to the Supreme Court where the sole governmental objective was to deport one man. Along the way, the government would insist he was a Communist, his lawyers would be found in contempt, and the government would continually call unreliable witness after unreliable witness all in an effort to get Harry Bridges to go back to Australia, a country he had not seen since he was 16 years old. It is not giving too much away to say that Harry Bridges died in San Francisco in 1990 at the age of 89 while married to his second wife (though there is an interesting twist in that plotline as well). He was famous once. His story should be again.

Victoria L. Nadel is a defense attorney in Salem, Massachusetts.