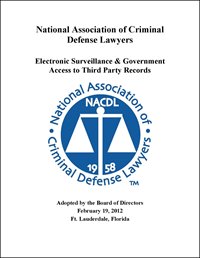 In February 2012, NACDL’s Board of Directors adopted a white paper report on Law Enforcement Access to Third Party Records. Federal laws protecting individual privacy rights in electronic communications have not been meaningfully updated in over 25 years, even though many of today’s technologies were not even conceived of when Congress considered the legislation and when the Supreme Court created the “Third Party Doctrine.” Because of society’s reliance on third party carriers, such as Internet service providers, cellular phone service providers, and “cloud” computing services, to communicate, work and socialize, privacy laws need to be updated to keep pace with today’s evolving technologies. This white paper discusses the current status of the law, including federal laws such as the Electronic Communications Privacy Act, and Supreme Court precedent, including United States v. Jones, and concludes with recommendations for reform, such as a recommendation that law enforcement officers should be required to obtain a warrant based on probable cause before they can access the content of electronic communications or geolocation information.